The Conservatives can lead the fight against racial and systemic inequality 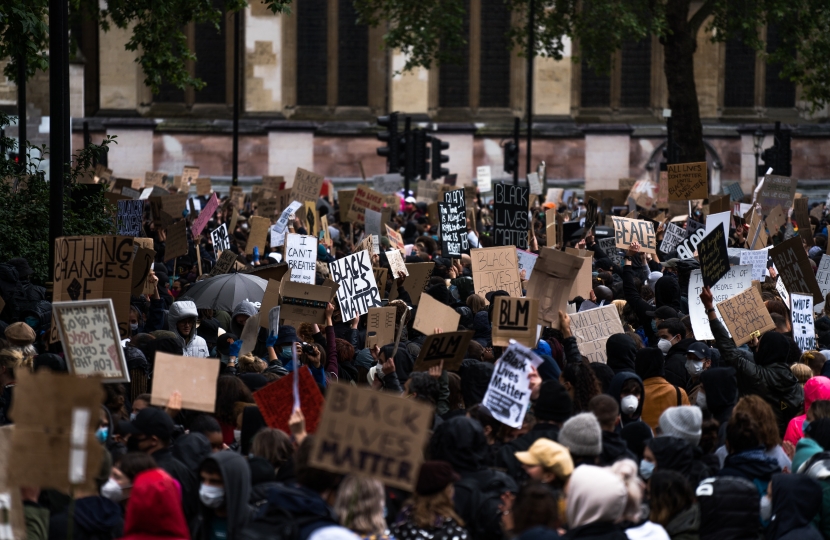 The horrific murder of George Floyd has rightly provoked outrage and anger across the world and has forced many of us to confront many tough questions on race and equality. Whilst his atrocious death happened thousands of miles away in a foreign country with a very different racial experience to ours, the questions being asked by campaigners and the change called for by activists is wholly relevant here.

Yet amidst the passionate displays of peaceful protests across the UK, and the unfortunate acts of violence from a selfish minority, I have become deeply concerned that the important cause for racial equality and the fight against institutional injustices are become increasingly polarised upon political and cultural lines. We must not let the cause for equality be dominated by extremist and violent views, as it risks alienating moderate voices and provoking a fierce and relentless backlash which could further inflame the tensions across our society. Nobody wants to see the UK descend into the culture war that has consumed America over the last few years.

For that reason, I want to set out and make the calm and composed case for change which goes beyond party allegiances, class boundaries, and geographic limits. Because what many people don’t know is that the fight against racial injustice will have a positive impact for all corners of our country by alleviating inequalities which have been starving the most deprived towns and communities of opportunity for decades.

At the crux of this issue is class. We know that the working class of this country have lower outcomes across the board. If you are working class you earn less, die earlier, attain lower educational outcomes, find it harder to get a job, or earn a high-quality degree, the list goes on and on. But what has been lost in the discussion surrounding class is that a disproportionate number of the working classes are from ethnic minority backgrounds. We know this because ethnic minorities are over-represented in low pay sectors and underrepresented in high pay sectors. We also know that ethnic minorities are more likely to earn less than the living wage. Additionally, when it comes to poverty whilst 19% of white Britons currently live in poverty, 22% of Indians, 39% of Black people, 45% of Bangladeshi, and 46% of Pakistani people currently live in poverty.

Yet the role of class is often lost in the discussion on alleviating racial inequalities. The Runnymede Trust has carried out some compelling work on this point and proposed that that there is a general misconception that the working classes only comprise of white older men. Indeed, this group were the most confident in identifying as working class, whilst other minority groups expressed confusion in identifying with this group. This is despite the fact that working class people from white and minority backgrounds all experience a very similar set of experiences and conditions, namely: being held back from fulfilling their potential; social alienation in institutional spaces; feeling discriminated against in the labour market; experiencing indignity and neglect when navigating public services; and shared resentment and loss of community space in the face of gentrification.

To sum up, we need to start looking at the working class as a diverse and disproportionately multi-ethnic body which lacks the tools and opportunities to make a better life for themselves. Viewing systemic racism through this prism I believe is crucial in helping people to understand the meaning behind the Black Lives Matter protests.

Let’s take graduate employment for example. Ethnic minorities are more likely to graduate into unemployment than their white counterparts, but the same is true of white Britons from a working-class background. By targeting policies such as CV workshops, career advice, and interview skills at graduates from all working-class backgrounds, regardless of race, then we will see a marked improvement in the life prospects of ethnic minorities, whilst also ensuring the white working class don’t get left behind.

This I believe really outlines Conservatism at its best, alleviating poverty and creating opportunity by addressing the root causes of these issues, namely the lack of education and a lack of good job prospects. Not, as some would argue, through distributing handouts which fail to properly address these inequalities. Our unprecedented landslide victory in December represented a resounding endorsement for this philosophy, as traditional red seats up north and in the midlands embraced our aspirational levelling up agenda.

To me, this proves that as the new party of the working classes, the Conservatives can be a powerful force in the fight against racial inequality.

By moving beyond binary identity politics, and de-racializing our perception of the working class, I sincerely believe that we can inspire confidence in the Conservative Party to tackle the issues surrounding race and inequality head on. Once we understand that the levelling-up polices that will benefit the working class will greatly benefit minority communities, it becomes clear how and why the Conservative Party is a true champion against systemic inequalities.

Of course, there are still many injustices that ethnic minorities exclusively suffer regardless of class, and there is a lot we can, and must, do to tackle this. But economic inequality plays a big part in the many forms of systemic racism that plagues our country, and I am sure that the goals of the Conservative Party, and those of the peaceful protests are not so far apart. By continuing to take the time to study these inequalities, rather than dismissing them out of hand, we can begin to underline the Conservative Party’s role in alleviating ethnic inequalities across the UK.

Thousands of organisations across a range of sectors including the performing arts and theatres, heritage, historic palaces, museums, galleries, live music and independent cinema will be able to access emergency grants and loans.