And when I look back on that relationship, with complete admiration for both Reagan and Thatcher’s global leadership on the world stage, I have no doubt that it was one of the most significant political relationships of all time.

Ever since the first British settlers landed at Plymouth Rock, the unique bond between Britain and America has consistently, more than any other partnership, changed the world.

Together with America we won two world wars, made the world safe for democracy, kept the Cold War cold and outlasted the USSR – and those are just the top lines!

There were many close relationships behind the triumphs, like the one between Winston Churchill and Franklin Delano Roosevelt, but I would argue that none have been as close as Ronald Reagan was to Margaret Thatcher. 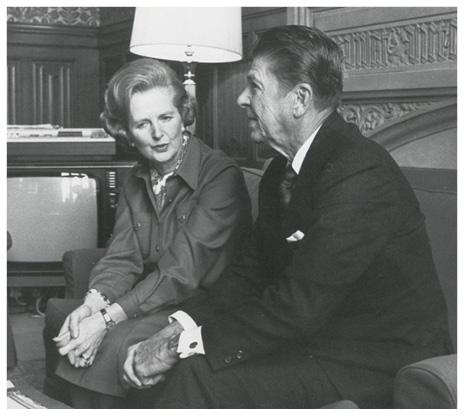 ‘Ronnie’, as Margaret Thatcher affectionately called him, quickly fell for his British counterpart. They came to power at roughly the same time, shared similar worldviews, and had a deep love for each other’s countries.

It was a true partnership. Thatcher and Reagan noticed that Gorbachev was someone whom they could do business with, and by working together they managed to bring about the end of the Cold War and the liberation of millions of people across Eastern Europe.

This success is often overlooked these days, particularly with the rise of Putin, but it was a momentous achievement – and to this day millions of people owe their freedom to it.

And that’s true more generally of the special relationship. The work we do together helps to guarantee security for millions of people – and, as we’ve seen in Ukraine, helps to support those fighting for their own freedom.

While the special relationship will endure no matter what parties are in power, I’d argue that Conservatives have a record of making the relationship a priority – from Churchill and Roosevelt, Macmillan and Kennedy, all the way to Boris Johnson and Joe Biden. And I believe that’s exactly what our country would want.