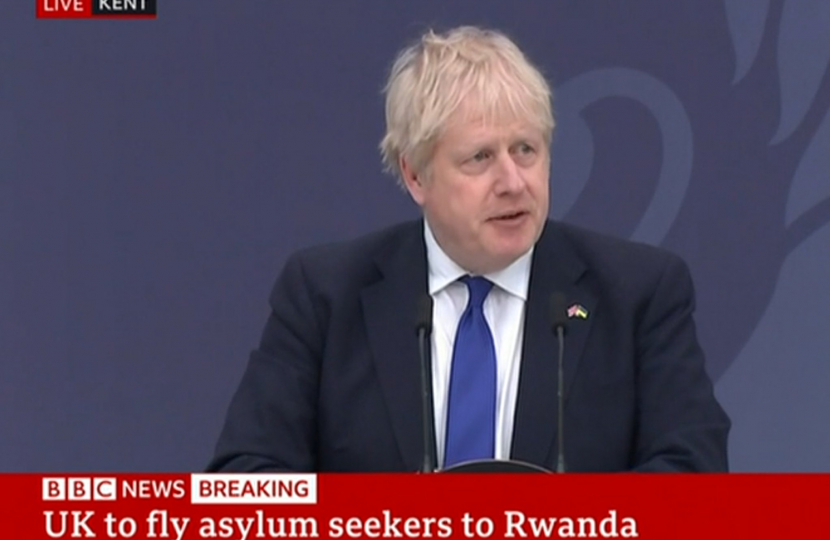 The Prime Minister has just announced strong new measures to tackle illegal migration to the UK. Since 2015, 185,000 refugees have been offered a place here through safe and legal routes. We must not allow dangerous and illegal routes, run by people smugglers, to persist.

The government has today (Thursday 14 April) set out bold new plans to tackle illegal migration, control our borders and crack down on the criminal gangs exploiting this international crisis.

Central to this is a world-first Migration and Economic Development Partnership signed by the Home Secretary, Priti Patel, and Rwandan Minister for Foreign Affairs and International Co-Operation, Vincent Biruta.

This will see migrants who make dangerous or illegal journeys, such as by small boat or hidden in lorries, have their asylum claim processed in Rwanda. Those whose claims are accepted will then be supported to build a new and prosperous life in one of the fastest-growing economies, recognised globally for its record on welcoming and integrating migrants.

Under this Partnership the UK is investing £120 million into the economic development and growth of Rwanda. Funding will also be provided to support the delivery of asylum operations, accommodation and integration, similar to the costs incurred in the UK for these services.

Alongside this action, which will disrupt the business model of people-smuggling gangs, the military will also now take operational command of responding to small boats in the Channel, in partnership with Border Force.

This will happen with immediate effect, and be backed up by £50 million in new funding. This change will deliver new boats, aerial surveillance and expert military personnel. In doing so it will bolster Border Force teams and their existing patrol vessels and provide a Wildcat helicopter.

Together this will significantly enhance our ability to detect boats. The increased surveillance will mean we can better gather evidence for criminal investigations, ensuring more people-smugglers who trade in these life-threatening journeys can be referred for prosecution and brought to justice.

Finally, to address the unacceptable, £4.7 million per-day cost to the taxpayer from housing migrants in hotels (including those who have arrived through resettlement programmes), we will be introducing a new, nationwide dispersal system so asylum pressures are more equally spread across local authorities. We will also shortly open a new, bespoke, asylum reception centre in Linton-on-Ouse.

The global migration crisis and how we tackle illegal migration requires new world-leading solutions. There are an estimated 80 million people displaced in the world and the global approach to asylum and migration is broken.

Existing approaches have failed and there is no single solution to tackle these problems. Change is needed because people are dying attempting to come to the UK illegally.

Today we have signed a world-leading Migration Partnership with Rwanda which can see those arriving dangerously, illegally or unnecessarily into the UK relocated to have their claims for asylum considered and, if recognised as refugees, to build their lives there. This will help break the people smugglers’ business model and prevent loss of life, while ensuring protection for the genuinely vulnerable.

This government is delivering the first comprehensive overhaul of the asylum system in decades. At the heart of this approach is fairness. Access to the UK’s asylum system must be based on need, not on the ability to pay people smugglers. The demands on the current system, the cost to the taxpayer, and the flagrant abuses are increasing. The British public have rightly had enough.

That is why we are overhauling this broken system. Our New Plan for Immigration will improve support for those directly fleeing oppression, persecution and tyranny through safe and legal routes, deter illegal entry, and make it easier to remove those with no right to be in the UK.

Rwanda is committed to international co-operation and partnership on migration, in particular the opportunities that a robust protection system as well as a comprehensive human capital investment program can create, for migrants and for development of the host country.

There is a global responsibility to prioritise the safety and well-being of migrants, and Rwanda welcomes this Partnership with the United Kingdom to host asylum seekers and migrants, and offer them legal pathways to residence. This is about ensuring that people are protected, respected, and empowered to further their own ambitions and settle permanently in Rwanda if they choose.

These new measures, combined with the reforms to the asylum system and the changes to our laws in the Nationality and Borders Bill, will help deter illegal entry into the UK. In doing so it will help break the business model of the criminal smuggling gangs, protect the lives of those they endanger, ensure continued support for the truly vulnerable, and enhance our ability to remove those with no right to be in the UK.

The UK has a proud history of welcoming those in need. In the last year alone, the UK has provided support for people across the world, providing sanctuary to over 97,000 Hong Kong British Nationals and over 13,000 Afghan nationals - and more than 50,000 people have been granted visas under the Family and Homes for Ukraine Schemes.

It is by reforming the asylum system and taking bold, international action to address the global migration crisis that we can ensure we can keep providing support and protection for those who need it, especially those most vulnerable, through proper safe and legal routes.

With new measures today we are taking real action on the cost of living. In contrast to the uncosted, unworkable plans put forward by others, this Government is delivering energy cost relief and tax cuts for 70% of people in our country.